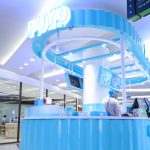 In the beginning, our team started selling Puyo online and through various local brand bazaars in Jakarta, Indonesia. A few months later, Puyo opened our first outlet on September 2013 and with a lot of hard work and the support from #PuyoPeople, Puyo Desserts has now opened more than 40 outlets around Greater Jakarta, Karawang and Bandung.

*All social media content is under the copyright of Central Park Mall and its related parties.